Who knew that the flu was “smart”?

Are you feeling a tickle in the back of your throat? Is your body aching all of a sudden? The bad news is that you may have come down with a case of the flu, but the good news is that information and fast-acting remedies can help you manage the flu better. Use these unusual facts about the influenza virus to build up your knowledge so you can create an informed defensive plan.

The Flu Spreads Much Easier Than You Think

Remember being told to stay away from someone who’s coughing or sneezing? Although that is good advice to go by,  simply steering clear of someone’s sneezes isn’t a full solution. According to research conducted by Dr. Donald Milton, MD, MPH, professor of environmental health at the University of Maryland School of Public Health, avoiding the flu just got a whole lot more difficult.

"We found that flu cases contaminated the air around them with infectious virus just by breathing, without coughing or sneezing," explained Milton. "People with flu generate infectious aerosols (tiny droplets that stay suspended in the air for a long time) even when they are not coughing and especially during the first days of illness. So when someone is coming down with influenza, they should go home and not remain in the workplace and infect others."1

Because the flu spreads so easily, it’s important to take better precautions to avoid spreading the disease. If you are infected with the flu, it’s best to stay home and away from others until you feel better.

Mucus Is Helpful (in Theory)

Mucus certainly isn’t fun to deal with, but it turns out that it may actually be a key component to beating the flu altogether. According to research published in the journal Cell Reports by study author Lars Hangartner, PhD, an associate professor of immunology in the Department of Immunology and Microbiology at Scripps Research, “antibodies called IgAs, which are commonly found on mucosal surfaces, can actually protect us from infections."

While mucus doesn’t seem like an appealing thing to deal with when you have the flu, the antibodies in them are beneficial in keeping us healthy. Mucus is healthy when it is wet, so the best way to keep our mucus healthy is to stay efficiently hydrated.3 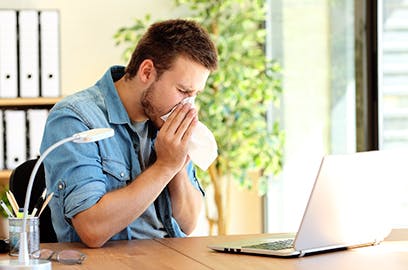 Mucus certainly isn’t fun to deal with, but it turns out that it may actually be a key component to beating the flu altogether.

The Flu Virus Is Smart

Researchers at Aarhus University have determined that the influenza virus is smart enough to mask itself from discovery long enough to settle in and make you want to curl up on the couch with a box of tissues. "The virus contains a protein that masks the virus entering the cell. In this way, the influenza virus can spread more easily before the immune system recognizes that it is a virus and attempts to fight it," says Associate Professor Christian Holm from the Department of Biomedicine at Aarhus University.2

Flu Season and its Impact

Another important fact to consider when tackling the flu is knowing occursi. It’s possible to catch the flu any time during the year, but the likelihood of catching the flu is much higher during flu season. Typically, flu activity begins to increase around October and peaks between December and February, but every flu season is different. Even though flu season changes every year, it commonly occurs during fall and winter when the weather gets colder.

By knowing when flu season potentially occurs, you can plan to get your yearly flu shot when it is available. Flu shots are one of the most effective ways to protect yourself and others from the flu. Since the severity of flu season varies year by year, getting the flu shot can prepare you best for a highly severe season.

What does all this mean to you? While your body recovers from the virus, you can help alleviate discomfort from the symptoms by using an over-the-counter medicine such as Theraflu Multi-Symptom Severe Cold Hot Liquid Powder, which will help treat your symptoms and provide you with warm, powerful relief while you recover. Then, be sure to contact your doctor to learn about further treatment options.